Youths encouraged to engage in the political process (NIMD)

Overview of projects in Jordan

Since 2017, when Jordan became a so-called focus country for the Dutch government, the Netherlands has stepped up its collaboration with Jordan to help the country cope with several inter-related challenges. The crisis in Syria led to an influx of Syrian refugees, which placed increased pressure on the job market and on facilities such as schools and hospitals. The regional troubles also impacted strongly on the economy, reducing trade opportunities and increasing unemployment (especially among young people). Moreover, Jordan has a general lack of natural resources on which to rely. In this context, support from the international community is necessary to keep Jordan secure and stable. The Netherlands’ programmes in Jordan are wide-ranging and target both refugees and vulnerable host communities. Economic development and especially private sector development is key in the Netherlands’ support to Jordan while ample attention is paid to social protection, education and employment, and the inclusion of vulnerable people. A focus on boosting the private sector and specific interventions to improve on vocational education opportunities create more possibilities for the economy to develop and generate jobs in a number of sectors including agriculture. Food security, water scarcity and climate are also being addressed. Overall, women and youths in Jordan face the toughest challenges and the Netherlands takes their prospects seriously by prioritising these groups in our interventions.

The Netherlands is actively helping to maintain the stability of Jordan by tackling problems such as unemployment. Through its programmes, the Netherlands is stimulating access to education for both refugees and host communities, as well as private sector development with a specific focus on the agricultural sector. In this sector, our programmes are aligned with the environmental challenges Jordan faces through building towards more earning capacity in the agricultural sector, while using less water and less (fossil-based) energy. In the area of human rights, the Netherlands prioritises equal rights for women, freedom of expression and internet freedom, while preventing marginalisation, polarisation and radicalisation.

The expected result of the HAED-Jo project is increased employment of skilled workers in the agricultural sector. In addition, the project aims to enhance the competiveness and earning capacity of farmers, while reducing their use of water.

The ILO project aims to promote the creation of decent agricultural jobs for refugees as well as Jordanians. Apart from being an aim in its own right, this will also contribute to the competiveness of the Jordanian horticultural sector and boost economic growth. The expected results are improved policies at governmental level and improved practices at farm level, leading to better farm working conditions.

Through the NIMD programme, the Netherlands encourages young people to be politically savvy and engage in the existing political system in Jordan. Our expected result is to see a growing young community that is able to express itself and contribute positively to the Jordanian political landscape.

The Hydroponic Agriculture and Employment Development Project (HAED-Jo) aims to advance efficient farming in Jordan, create employment opportunities for Jordanians and Syrian refugees in agricultural production and associated post-harvest chains, and reduce water use in the production process.

The project is implemented by Eco Consult and supported by Wageningen University & Research (WUR). The Dutch private sector is also involved in the construction of greenhouses and the provision of greenhouse technology.

The project embraces a multipronged approach through (i) enhancing the competitiveness of Jordanian produce in national, regional and international markets through the adoption of improved technologies for sustainable and efficient agriculture and the introduction of market-driven approaches to improve productivity and reduce water use; (ii) strengthening horticultural business partnerships and creating market systems; (iii) expanding the pool and skills of human resources in hydroponics and post-harvest management to prepare for labour market entry; (iv) creating employment opportunities in commercial farming and agribusinesses, especially for vulnerable communities; and (v) improving livelihood opportunities through the implementation of hydroponic packages and improved post-harvest practices at the community level with households and community based organisations (CBOs).

An important target group is large-scale farmers who can afford to invest in advanced greenhouse technology and – after positive outcomes – can stimulate a trickle-down effect of best practices to medium- and eventually small-scale farmers. During the first year of the project, 192 people were supported in increasing their livelihood opportunities; 5 local institutions were strengthened; and 3 community based organisations and 18 businesses were supported with efficient hydroponic and post-harvest chains. Furthermore, two modern greenhouses in which fruit and vegetables are grown have been constructed and are operational, resulting in a strong reduction in water and pesticide use compared to traditional Jordanian greenhouses. This leads to a greener and healthier product that is now also offered in the best supermarkets in Jordan. Learn more about this project on Openaid.nl

The arrival of many Syrian refugees in Jordan created a new bottom tier of workers with few formal labour market opportunities. With no better options, many resorted to work in the informal economy, characterised by low wages and indecent working conditions.

The decent work project is executed by the International Labour Organization (ILO) to advance decent work in the agriculture sector through a compliance model that strengthens productivity, national labour legislation and adheres to international labour standards. The compliance model guides work to enhance national regulatory frameworks and structures. More robust national frameworks will, in turn, reinforce farm-level interventions that advance decent work for all.

The underlying idea is to capitalise on the potential for job creation in the agriculture sector with decent jobs that comply with international standards. Compliance with those standards is also increasingly a condition for the export of horticultural products and the ILO also works with the Netherlands Centre for the promotion of imports from developing countries (CBI) and the Jordanian Exporters and Producers Association for Fruits and Vegetables (JEPA) in this respect.

This project places compliance with decent work standards at the forefront. The approach is to work together with farmers and engage with them to explore the current situation and identify realistic steps towards compliance with international labour standards.

The project implements the priority of the Netherlands in Jordan to promote the competiveness of the Jordanian horticultural sector, to boost economic growth and create decent jobs for refugees and Jordanians. 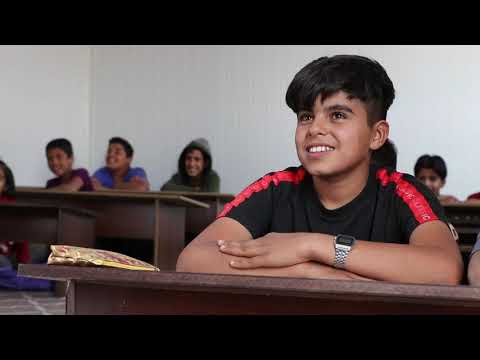 To put these skills into practice, the School of Politics hosts political dinners for students and current politicians. The dinners create an informal platform for the participants to discuss the role of political parties in Jordan. Read more about NIMD in Jordan