Witnesses against ISIS protected and provided with psychosocial support

Overview of projects in Iraq

With a view to achieving sustainable stability in Iraq, the Netherlands invested in security, migration governance and the return of displaced people, accountability and human rights, and economic development.

Decades of war have made life in Iraq difficult. The war against ISIS destroyed houses, roads and hospitals. Millions of Iraqis had to flee their homes and many remain displaced today. The Iraqi justice system is struggling to ensure accountability for crimes committed by ISIS. In the meantime, many youths are struggling to find jobs and have lost hope of finding a better future in Iraq.

If these issues are not addressed, Iraq risks further destabilisation, which will have considerable effects on security and migration issues. Effects that will be felt in Iraq, the wider region, Europe and the Netherlands.

In the reporting period, the Netherlands contributed to sustainable stability in Iraq, for example through the clearance of explosive remnants and the rehabilitation of basic services in areas liberated from ISIS, and by giving forcibly displaced people the prospect of returning home, including the Yezidi community in Sinjar.

We also supported evidence gathering for crimes committed by ISIS, since accountability is crucial for a country moving forward after such a dark chapter in its recent history. Programmes funded by the Netherlands have a ‘victim-centred approach’, focusing on their needs and grievances.

UNDP’s Funding Facility for Stabilisation (FFS) has contributed to the return of more than 4.5 million internally displaced persons since the programme’s inception in June 2015. Millions of people are directly and indirectly benefiting, especially women and youths, and services have been re-established in the liberated governorates of Anbar, Diyala, Kirkuk, Ninewa and Salah al-Din. The FFS had its origins in the context of the military campaign to prevent ISIL from occupying Iraqi territory and the urgent need for post-conflict stabilisation in liberated areas.

Priority was usually given to the repair of essential public infrastructure, such as water systems and electricity grids; employing local individuals to provide immediate cash livelihoods at the same time as removing rubble and debris; reopening transportation routes, notably for urban revitalisation and to facilitate economic activity in all locations; providing cash grants for businesses to reopen; and restoring schools and universities, health facilities of all kinds and administrative buildings. Inherent in all of these efforts was the goal of creating improved conditions that would not only benefit existing residents but would also prompt internally displaced persons (IDPs) to return.

The Netherlands is the third-largest donor to the FFS and has contributed approximately EUR 72 million to date. Examples of infrastructure that has been rehabilitated by the Dutch contribution include the Fallujah Teaching Hospital and the Sinjar Police Station. The Teaching Hospital provides specialised and critical health care services for residents of Fallujah, Karma and surrounding areas – approximately 350,000 people. In Sinjar, the Police Station is an integral project in enabling greater returns and bringing a sense of normality back to Yezidi communities, which suffered unimaginable atrocities inflicted by ISIS.

Overall results of the programme include:

Half a million young people have better access to education. More than 500 schools have been rehabilitated.

24,000 private homes have been restored in places like Ramadi, Fallujah and Mosul, benefiting 182,000 people.

33,000 people have been provided with short-term work opportunities.

Read more about the FFS project on the UNDP website

Support to the Victim and Witness Protection Unit of UNITAD

UNITAD’s work helps to build criminal cases against former ISIS fighters, ensuring that they do not escape justice. It also contributes to building a clearer picture of what happened in the territories that ISIS controlled and it can help the families that suffered through this period to identify their family members, for example by excavating mass graves.

Among other methods, UNITAD is collecting evidence through interviews with victims. These victims have often experienced extremely traumatic events and need psychosocial support to fully tell their stories. Due to the potential risks that these witnesses face, such as violence in response to their testimonies, UNITAD also needs to take measures to ensure their anonymity and the confidentiality of the interviews. The Netherlands’ contribution in 2019 helped to strengthen the Victim and Witness Protection unit, including psychologists to provide support with the interviews.

At the end of 2019, the Netherlands provided further support to UNITAD to employ several Yezidi staff members, who can help the Investigative Team to engage with the Yezidi community in its own language. UNITAD works closely with Yezidi civil society organisations like Yazda and Free Yezidi Foundation, which also receive support from the Netherlands.

Dutch support to UNITAD fits in with our broader support for accountability in Iraq. In 2019, the Netherlands also renewed its support to the DNA identification process of missing persons, helping to identify the bodies of people discovered in mass graves. 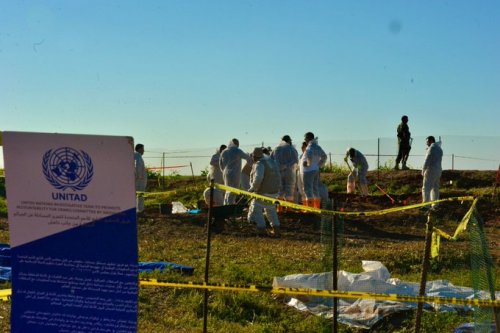 Local partner organisations Kapita (in Baghdad) and M-Select (in Erbil) run the incubators with the help of Dutch funding. Selection of the first participant groups in both cities was completed in 2019. By the end of 2022, the project will have helped six groups of 20 entrepreneurs to make their ideas a reality.

Overview of Dutch priorities in Iraq