The Netherlands contributes to a safer and more stable Great Lakes region. The security situation, notably in - but not limited to - eastern DRC, remains difficult and the risk of large-scale conflict is still present, which means that efforts to prevent conflict and promote stability remain important. The overarching goal of the Great Lakes programme is to contribute to stability and mitigate the consequences of conflict through the improvement of human security, inclusive growth and access to natural resources (such as land). A good presence in the region and the close collaboration between embassies on political and development activities makes the Netherlands an appreciated and reliable partner.

The Great Lakes programme contains activities included within the Dutch priorities for development co-operation: security and rule of law, food security, integrated water management, and sexual and reproductive health and rights. The project activities work to address a number of drivers and causes of conflict from a political, economic, social and environmental perspective. The scale of the challenges and complexity of the context in this region (the level of human suffering, the security situation, the weak or sometimes absent government structures, infrastructural challenges) make project implementation a challenge.

The translation of project results into political engagement and vice versa is an essential part of the new regional strategy. It is also one of its main challenges.

Security is improving in eastern DRC by strengthening the collaboration between security actors and communities, resulting in the development of security plans. These plans identify the major security risks and activities to address those risks, and they are endorsed by the government. The plans and their validation by all levels of government make public debate and advocacy on politically sensitive issues possible (such as the financing of armed groups or harassment by the military/police).

Under the sexual and reproductive health and rights projects, victims of gender-based violence receive care and support through one-stop centres, which provide medical, psychosocial and legal support. As a result of the project, 219 perpetrators were arrested by the police and court cases were instigated.

Land is a major driver of conflict in eastern DRC. An effective approach to tackling land issues is urgently needed. A land conference was organised, bringing together all actors to discuss issues related to land tenure, identify present interventions and develop an action plan to address these challenges. The innovation of one of the projects, to develop group land titles (as a means to protect community land), was adopted by the government.

Living Peace In the Democratic Republic of the Congo

The Living Peace Institute (LPI) is an organisation working towards peace in the post-conflict areas of North and South Kivu.

Through this project, men - mainly from the police and army - who have displayed various forms of violence are engaged through therapeutic sessions. The main objective is to help them to develop non-violent behaviours towards their families and the community, and to heal from their trauma. These positive changes, combined with the restoration of peaceful family relationships, contribute to the promotion of peace and equality in the community.

The programme has reached 5,400 men and their families during the first phase. The involvement of the authorities at the local level (mainly the national police and the army) contributes to the appropriation and sustainability of the intervention. 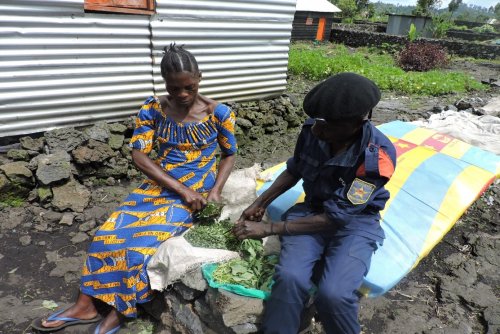 Read the success stories of the Living Peace project

Three projects contributed to this theme: the Living Peace project, the Mawe Tatu project and the Commodities-Chain-Care (3C) project.

Gender-based violence in DRC is very common. The programme works with both perpetrators and victims. It works to strengthen the position of women in society both by economically empowering them and by working on the attitude of men.

The Living Peace project’s ‘positive masculinity’ approach to combating sexual violence has reached 1,830 men. This project includes the main perpetrators of violence: ex-combatants, the army and police. The trust between communities and the army and police has increased in the project areas. Village savings and loan associations have economically empowered 4,351 women. This reinforces their capacity to provide for their families and reduces the number of enrolments in armed groups (Mawe Tatu).

The ‘one-stop’ centres established provided holistic care to 381 gender-based violence survivors. In communities in which the project is implemented, a decrease in the number of SGBV cases has been observed. As a result of project interventions, 219 perpetrators (including well-known war lords) have been arrested, directly contributing to stability (3C).

Three projects are being implemented under this theme: Media for Dialogue (M4D), the Consortium for the Integrated Stabilisation and Peace of eastern DRC (CISPE) and the I4S trust fund (Managed by Monusco).

A total of 108 dialogues were organised for local conflict management and 70 journalists were trained to monitor and counteract hate speech. The results have been an increase in knowledge and awareness in the target populations, grassroots networks have been built and spaces have been opened for cross-border dialogue and exchange. This has helped to combat negative perceptions of others, rebuild trust within and across borders, and facilitate locally owned solutions (M4D).

Seven security plans were endorsed by the government to enhance security at the local level. The security threats identified include many politically sensitive issues, such as land grabbing (concessions), financing of armed groups and harassment by the army and police. Thanks to the endorsement of the plans by all actors and levels of government, these topics can now be openly debated. These issues are starting to be translated into advocacy and media campaigns, which will extend the impact of the project beyond its intervention areas (CISPE project).

Support to the International Security and Stabilisation Support Strategy (I4S) has been reshaped. MONUSCO’s Stabilisation Support Unit (SSU) will strengthen the political dimension of its projects by improving content co-ordination and drawing lessons for scaling up from the I4S projects.

The Water4Virungas project aims to provide access to water to communities living around the national parks on the border between DRC, Rwanda and Uganda. Towards the end of 2018, the project supplied water to about 3,825 people and preparations were made for the construction or rehabilitation of water supply infrastructure that will benefit a significantly larger group of people during 2019. Prior to this, communities had to enter the park to fetch water, leading to conflicts with park guards and exposure to armed groups. Bringing water close to the community has reduced violence and human rights abuses in the implementation area.

The Lake Kivu Monitoring Project has started to revise the management prescriptions for the exploration of gas from Lake Kivu. This joint project by Rwanda and DRC contributes to improved relations and collaboration in the exploitation of this natural resource.

Food security activities have taken shape: the FARM and Maji ya Amani projects contribute to the realisation of results under this theme.

Both projects look at enabling conditions, such as access to land and conflict mitigation. Results in terms of value chain development are starting to be delivered. For example, Bralima (Heineken DRC) has an agreement with a farmers’ organisation to purchase 3,000 tons of rice annually. Banks are involved in supplying credit to farmers.

The development of a model of group land titles (212 titles in 2019) has improved land tenure security. These titles provide a cheaper alternative to land ownership registration and are seen as a potential tool to protect farmers on a large scale from land grabbing.

The organisation of a conference on land tenure (Bukavu, June 2019) has created a platform for discussion with leaders and has led to large support for tackling difficult issues such as: regaining land for communities from unproductive concessions; developing alternative titling systems; and addressing poor land governance. An action plan was developed, addressing major political issues. The conference and action plan make it possible to discuss these issues. The implementation of the action plan will take time but shows that longer-term approaches can make a difference in the Great Lakes region. The strong ownership of the conference by the new DRC government, led by Felix Tshisekedi, justifies a modest amount of optimism.

A number of projects have been able to create meaningful collaboration between relevant government authorities and communities in discussing highly political issues, such as land tenure, gender-based violence by the army/police and mistrust between communities.

However, it is important to note that the security situation in eastern DRC, the diminishing civil space in Burundi and the Ebola outbreak had a negative impact on the results, causing implementation to be postponed on different occasions.

The electoral process in the DRC took place in a climate of serious human rights abuses and the results were contested. In eastern DRC, despite the peaceful political transition, the number of armed groups is estimated to have increased and the new government has not yet regained full control over the national territory.

The good results of individual projects will be scaled up where possible. All projects will develop lobbying and advocacy components to ensure political buy-in and impact. Radio La Benevolencija will assist projects with the translation of results into media campaigns to reinforce political engagement.

Poor governance in the mining sector is a major factor that contributes to ongoing conflict in eastern DRC. A new programme on conflict minerals has therefore been developed to reduce the level of violent conflict and improve security in targeted red 3T and gold mines. The project will also develop an advocacy component with regard to regional issues, such as smuggling and regional co-operation to combat illicit mining.

A review of the conflict sensitivity of all projects was conducted to assess their capacity to incorporate specific challenges related to the conflict in the implementation area. As expected, there are weaknesses in the projects. A support programme has been developed to enhance a conflict-sensitive approach. This will help to avoid the exacerbation of existing conflicts.

Download PDF with results for SRHR in Great Lakes Region

Download PDF with results for Water in Great Lakes Region