Improved capacity for action for women in 15 provinces

Overview of projects in Afghanistan

The Netherlands has been actively engaged in Afghanistan since 2001 in terms of defence support, later combined with development co-operation and diplomatic engagement, also known as the integrated 3D approach.

The aim of Dutch engagement is to ensure that Afghanistan will become self-reliant and to enable the country to become a safe, stable and well-governed nation. Dutch efforts focus on strengthening the rule of law, promoting security, peace and stability, social and economic development, and women’s rights.

The Netherlands has been an active development co-operation partner in Afghanistan since 2006. Over the years, the international community together with the Afghan government has achieved some significant results, such as the increase in the number of boys and girls that can attend school and the amount of people with access to electricity and water throughout the country.

Nevertheless, with the conflict ongoing and more than half of the population living below the poverty line, the country still has a long way to go to become a safe and self-reliant nation. Dutch efforts to contribute to this aim focus on strengthening the rule of law; promoting security, peace and stability; social and economic development; women’s rights; tackling the root causes of irregular migration; and preventing Afghanistan from again becoming a safe haven for international terrorism.

In a co-ordinated effort with other international donors, the Netherlands has been an important contributor to Afghanistan’s development since 2006. As a result of internationally co-ordinated support to Afghanistan, school attendance has increased from 1 million to 9.2 million children, of which 39% girls. Youth literacy rates have risen from 47% in 2011 to 65% in 2018.

While gaps in education remain, women have been catching up with the female secondary education rate rising from 6% in 2003 to 39% in 2017. In general, women have a much better position in society than prior to 2002. Women now hold around 27% of seats in parliament and 16% of senior civil servants are female.

Afghanistan has witnessed a 75% increase in real incomes per capita and the government’s own revenues have increased from 3% in 2002 to 14% of GDP in 2018.

Millions more Afghans can now access electricity, as the percentage of Afghans with access to grid electricity has increased from circa 8% in 2004 to circa 31% in 2019. In addition, 60% of Afghans have access to electricity through solar units.

In Afghanistan, Community Development Councils (CDCs) are the lowest level of democratic representation. The 20 members of a CDC represent a community of circa 1,500 people.

With Dutch funding, UN HABITAT supports 110 CDCs across 8 Afghan cities. In the reporting period, 1,640 CDC members and their communities learned about their rights and the government’s duties. As a result, citizens are better able to advocate their interests and the connection between government and citizens is reinforced. In the long-term, this will lead to a more effective national government and responsible city governance structures, able to provide security.

CDCs receive training to establish a project in their own community, aimed at increasing local security. Each CDC receives US$ 70,000 to set up a project, but on the condition that the CDC members also contribute financially. The projects (water drainage, schools, street lighting, parks, etc.) are useful in and of themselves but are primarily a means to strengthen both the CDCs and the social fabric. 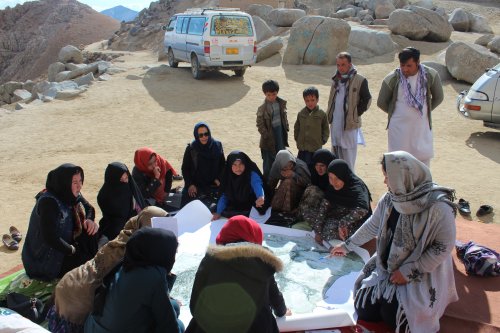 Read more about the project on the UN HABITAT website

A significant portion of the Dutch ODA budget for Afghanistan goes to the security sector. In addition to our support for the army and the police, the Netherlands has achieved successes in strengthening the security sector from the bottom-up (through civil society) as well as through its UN Habitat Safer City programme and its GIZ Rule of Law programme.

Education on and raising awareness of basic rights and legal frameworks is important for Afghans who have lived through years of conflict. Especially for women, access to justice can be difficult in Afghanistan. As the host country to many international courts, the Netherlands actively seeks to improve access to justice worldwide. We therefore aim to increase the participation of women in training activities in both the formal and informal justice sectors, as well as in universities and schools, which has led to better access to justice for Afghan women. In the reporting period, 10 workshops on access to justice have been organised under this project.

The Netherlands believes that in order to achieve and maintain a stable Afghanistan, an inclusive and sustainable peace is needed. Peace is more successful, more sustainable and more encompassing if it is inclusive and women therefore need to be engaged. The Netherlands strongly advocates the role of women and young people in the peace process. To this end, the Netherlands supports the creation of Provincial Women's Networks in 15 provinces, which represent more than 7,700 women in the country and push for policy reforms and the involvement of women in peace processes in the provincial and national peace councils.

Furthermore, the Netherlands supports the training of women and men in remote areas of Afghanistan with the aim of improving their economic position. Women learn how to better gain access to the local market with their products, thereby increasing their economic independence and their families’ financial situation. In the reporting period, the project strengthened the capacity of more than 7,700 women to adjust to changing contexts.

According to the UN Food and Agriculture Organization, agriculture in Afghanistan contributes almost a third to GDP and provides over two-thirds of employment. This is why the Netherlands contributes to improving food security and shock resilience in Afghanistan. Through our contributions to the Afghanistan Reconstruction Trust Fund, the National Agricultural Education College (NAEC) and the World Food Program, we have achieved important results.

Since its establishment in 2011, 914 agriculture teachers have graduated from NAEC, of which 162 were women. In the reporting period, NAEC, in close co-operation with Wageningen University in the Netherlands, has also developed a new curriculum to improve the quality of education standards at 151 agricultural high schools across the country. In co-operation with the Technical and Vocational Education and Training (TVET) Authority, the project distributed more than 100,000 books in two languages (Dari and Pashto). In 2020, work will continue to upgrade the level of education from 'college' to 'University of Applied Science', in order to make the contribution to Afghanistan’s development more sustainable.

The Netherlands works with the World Food Program to make people more resilient to shocks such as drought and flooding. Its food for assets project reduces the vulnerability of Afghan people and increases their food security by building dams, dikes and irrigation channels. It teaches them agriculture skills that protect important farmlands. In the reporting period, the programme reached more than 67,000 undernourished people and more than 22,000 people’s nutritional situation became more resilient to shocks.

Download PDF with results for Food security in Afghanistan